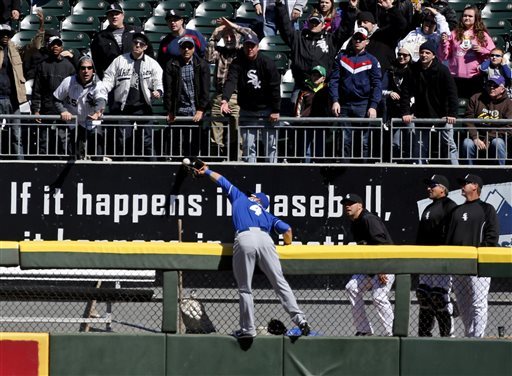 “Between the Royals’ improvements and the Royals’ bullpen, I’ve got them finishing second [in the ALC].”
Buster Olney, ESPN MLB writer, on his preseason prediction for the Royals, 810 AM
GH: Buster’s preseason optimism for the Royals is not being met with many like minds locally here in Kansas City. 25 years of bad baseball will do that to a media and fan base. But should we be this down about an 0-2 Royals’ team on April 4th? Kevin Kietzman is almost giddy with excitement over the Royals being off to a poor first week. Read on.

“I don’t like always being right. … Will the Royals be over .500 at any point this year?”
Kevin Kietzman, after the Royals opened the season 0-2, 810 AM
GH: You can hear the glee in KK’s voice as he announced the Royals’ first two losses of the season during his afternoon show this week. When he discussed the two runs the Royals scored in Chicago on Wednesday, he made sure to point out that one of the runs was “COMPLETELY unearned.” Which I guess in his mind is somehow different than just unearned. Hey, we all like to be right – but KK comes off sounding like as an ass with his victory dance after every Royals’ loss two games into the season.

“To avoid a disastrous start, this team has got to find a way to win two of the next four. They have to! They’ve GOT to go 2-2 in their next four. They’ve got to!”
Kevin Kietzman, 810 AM
GH: The Royals opened with a three-game road series in chilly Chicago and then have three more in Philly against a very good Phillies team they will have to face without a DH. That is not a Bill Snyder-esque schedule. Yes, it would be great to see the Royals get some wins this week, but the season isn’t over with a poor first week – even as much as KK would like it to be.

“If Billy Butler was here – and I consider him a friend, we’ve done some charity work together – he’d whack me over the head with a stick…but did he have extra clothes on [Monday] or what? I’m going to go ahead and say it – Butler’s not going to do what he did last year.”
Kevin Kietzman, 810 AM
GH: People who have celebrities as friends don’t feel the need to mention they have celebrities as friends. But I’m all for Butler whacking KK with a 34-ounce Louisville Slugger.

“I’m on a lonely island. I still think Alex Gordon has been a disappointment.”
Kevin Kietzman, 810
GH: Gordon is a two-time Gold Glove winner and the Royals’ best hitter after Butler. He is also a high-character person who is just entering his peak years as a baseball player. Gordon’s biggest sin when it comes to Kietzman is he played his college years at Nebraska. Nothing – and I mean nothing makes KK see red like a link to the hated Cornhuskers.

“I want everybody to know that I think Alex Gordon is a good player… Alex Gordon is the General Manager’s or the statistician’s dream! I need Alex to hit. When I watch him he looks like he LOVES to walk!”
Kevin Kietzman, 810 AM
GH: When Danny Clinkscale disputed KK’s claim [yes, he did] with some facts – like Gordon had 73 walks in 721 plate appearances in 2012, KK said, “One out of 10 times?” and then quickly went to commercial.

“I’m really, really concerned that Eric Hosmer is a project right now.”
Kevin Kietzman, 810 AM
GH: If Hosmer and Moustakas don’t turn into the players we all hoped they would become, the Royals are in for some more rotten summers. But these are the guys the Royals drafted, developed and told us would make a difference. I am not ready to give up on them or this season just because the squad is 0-2. This – April and hope — are all Royals fans have. We have the summer to bemoan our fate if this team heads south. But April is for rooting, hoping and thinking things could be different. KK wants to steal that from you, from me. Well, not gonna happen to this guy.

“Sometimes you get it right, Jack. A little trial and error goes a long way.”
Kevin Kietzman, responding to Jack Harry complimenting KK for having a wife who will be watching the Final Four with him in a tiki hut while they are on their island vacation, 810 AM
GH: A not-so-subtle shot at the mother of KK’s kids? Classy move for a radio host with a 50,000-watt microphone and an ex with a radio.

Software guy who has been writing my Off The Couch column in KC newspapers, publications and websites since 1994. Has been bounced from some of the finest media establishments this side of State Line Road. Dad first and everything else second...and there are a lot of everything elses.
View all posts by Greg Hall →
This entry was posted in Greg Hall OTC and tagged espn, excitement, royals. Bookmark the permalink.