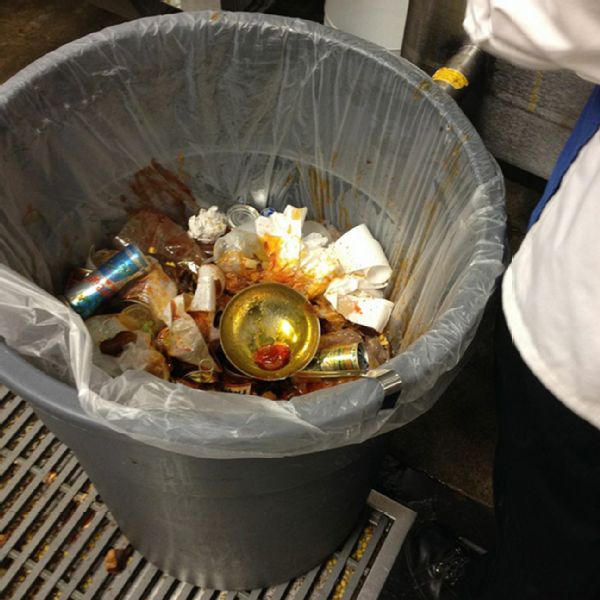 “A cook at Kauffman Stadium in Kansas City used a garbage can as a place to hold his ladle when it was not being used.”
Paula Lavigne, reporter, regarding a story broadcast by ESPN’s Outside the Lines on alleged unhealthy food practices at both Kauffman Stadium and Arrowhead, ESPN.com GH: Lavigne and ESPN’s Outside the Lines does what they do best with this story – ring the alarm bell loudly and shine a spotlight on the cockroaches. And in this instance – they did that literally. Read on.

“Among the concerns found at the stadiums by the manager: cockroaches in vending areas, mouse feces on the same tray as pizza dough, sinks where employees were supposed to wash their hands being blocked by boxes or trash, employees eating in food prep areas and trays of food headed for customers that measured at unsafe temperatures. The health department found several critical violations, including mold growth in ice machines, dirty pans and trays and excessive numbers of fruit flies.”
Paula Lavigne, reporter, regarding a story broadcast by ESPN’s Outside the Lines, ESPN.com
GH: I don’t think any of this should come as a surprise to anyone who purchases food as an event where they are trying to feed 40,000 people. If the folks out front selling the food are an indication of the work force cooking the food, the mold probably moves faster than those in charge of keeping things sanitary.

“He gave us photographs of boxes of cockroaches…”
Paula Lavigne, ESPN reporter, in an interview with Soren Petro, on photos sent to ESPN from Jon Costa, the district food safety manager for Aramark, 810 AM
GH: Props to Soren for scoring a timely interview with ESPN’s lead reporter on this story. She was very convincing. I have not yet heard an interview with representatives from Aramark, The K or Arrowhead but I am hoping they come off far better live than they did in their prepared press releases… 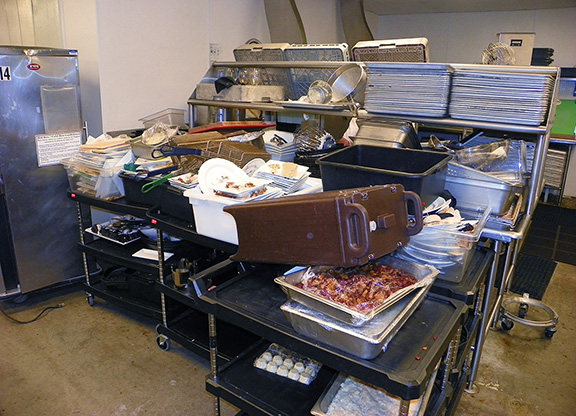 “The unsubstantiated claims raised by a disgruntled employee are very troubling, as is his unknown motivation. Especially disturbing is the fact that this individual is personally responsible and entrusted with managing food safety at the locations in question. … The random collection of isolated and questionable photographs that the employee distributed represents selective snapshot ‘moments-in-time’ that without proper context can support any number of conclusions.”
Tod MacKenzie, senior vice president of communications and public affairs for Aramark, responding to the health issues presented by Costa, ESPN.com
GH: “Selective snapshot ‘moments-in-time?’ Uh…Tod, that’s kind of what a photograph is. Unless Costa staged these photos, which appears highly unlikely, MacKenzie should be apologizing and telling us how this is going to change instead of questioning his employee’s motivation.

“We’ve served 3 million or 4 million fans this summer in Kansas City at those two stadiums. And the food is safe, the food is high quality, and there are really no issues.” Marc Bruno, chief operating officer of Aramark Sports and Entertainment, ESPN.com GH: No issues? None? High quality? Since this is obviously not true, it would leads us to not believe the rest of Bruno’s declaration that the food at Kansas City’s Truman Sports Complex is safe.

“After the last (World Series) game he said it looked like the workers just turned off the lights and shut the doors for several days. … Aramark was saying no one was harmed because there wasn’t going to be another game until March.”
Paula Lavigne, 810 AM GH: I might not be eating any hot dogs at The K next April.

“Health department division manager Naser Jouhari said the results were ‘shocking.’ He said his inspectors told him that it looked like Aramark workers ‘just flipped the switch off, and they walked out without doing any cleaning or removing any of the food items.’” Paula Lavigne, 810 AM
GH: Petro announced that Kevin Kietzman will be interviewing Jouhari on his radio show this afternoon. Let’s hope KK handles this interview as a reporter rather than a sensationalistic shock jock. This story appears to have plenty of dirt on its own and doesn’t need KK’s special brand of Jerry Springer spin.

“The main concern is (inviting) all these insects and rodents to the concession stands so they (could) contaminate food service, food contact areas.”
Naser Jouhari, on why it is necessary to clean up the food preparation areas rather than leaving it until March, ESPN.com
GH: Does this even have to be explained???

“We take great pride in promoting an atmosphere at Kauffman Stadium that Royals fans of all ages can enjoy. The excitement and energy running through the stadium was on full display during the World Series and our partners, including Aramark, play an important role in creating those memories. Food and beverage is integral to the fan experience and Aramark has been a valued partner in delivering those services to fans. We all take food service, safety and quality very seriously.”
Royals press release, ESPN.com
GH: That might be the worst press release response I have ever read relating to a serious allegation. It completely avoids the issue and talks about nonsense. Who wrote this nonsense? Aoki?

“We’re continually looking for new ways to enhance the fan experience and, for the past four seasons, we have partnered with Aramark to transform and elevate our general concession areas. The food and beverage service and selections delivered by Aramark are important parts of the Arrowhead experience.”
Chiefs press release, ESPN.com GH: These two press releases are basically nothing more than the Chiefs and Royals standing behind their business partner, Aramark, but refusing to address whether or not these health issues are legit and if so, what their plans are to correct them. It makes me think the Chiefs and Royals do not deserve the quality of fans they have inside our stadiums.