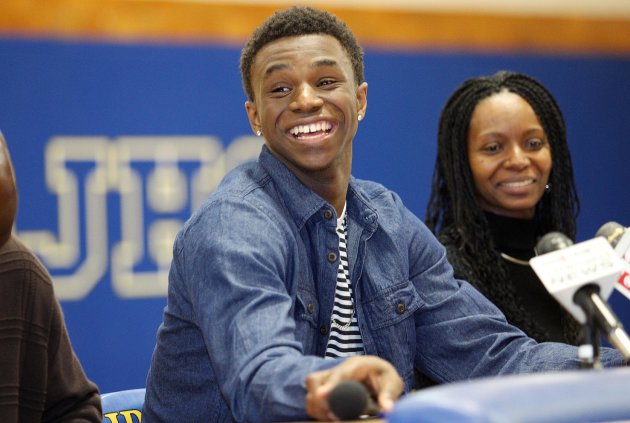 “We all start acted like somebody just sunk a 30-foot putt – high fiving each other.”
Kurtis Townsend, KU assistant coach who was the lead recruiter on Andrew Wiggins, on the scene inside Bill Self’s office when the KU coaches got word that Wiggins was signing with Kansas, 810 AM

“This just confirms the one thing I’ve known since birth – God is a KU fan. Kansas loses all five starters and they have a better team than they had last year.”
Carrington Harrison, on the highly-touted Andrew Wiggins’ decision to become a Kansas Jayhawk, 610 AM
GH: Harrison is an avowed Missouri fan. He doesn’t hide it; rather he relishes his Missouri fandom. But he is not blinded by his love for the Tigers. He understands that Kansas basketball and Allen Fieldhouse are special – even as much as that fact may pain him. I enjoy listening to Harrison discuss his lifelong hatred of Kansas but his professional respect for the program. He keeps it real. Kevin Kietzman’s takes yesterday on KU and Wiggins fell a bit short of real. Read on.

“This is also the end on this (Kansas) program of complaining about John Calipari and how Kentucky runs its program. The one-and-done rule which Kansas fans have hated forever – no more complaining! You love the rule today. The one-and-done rule is the greatest rule in college basketball today for Kansas fans. It is the greatest thing ever at this moment.”
Kevin Kietzman, 810 AM
GH: Kietzman’s tone was anything but complimentary toward Kansas. Yes, he believes this is a huge get for the Jayhawks but he was quick to paint this with a slimy Calipari brush. Read on.

“This is the NFL equivalent to saying instead of building through the draft, we’re going to sign a bunch of free agents.”
Kevin Kietzman, on Bill Self’s freshman recruiting staff, 810 AM
GH: Or how Bill Snyder rebuilds the K-State football program each year through his Junior College signings?

“This will all be over in ten months. This is a ten-month love affair.”
Kevin Kietzman, opening his Tuesday show with the news that Andrew Wiggins is heading to play his college basketball at Kansas, 810 AM
GH: Kietzman replaced his favorite the phrase, “wind-aided” with a new one, “ten months” while talking about Wiggins. It sounded to me like KK was trying to convince himself that his pain of having to watch Wiggins in KU blue next season will all be over next April. I understand that as a K-State alum, this signing doesn’t make him happy. So why not be honest about it and say that? Instead, Kietzman does what he does best – throws out veiled compliments meant to impugn his target. Read on.

“This isn’t about Kansas. This is about this coach and this player at this time. This is the absolute perfect fit for Andrew Wiggins.”
Kevin Kietzman, 810 AM
GH: This isn’t about Kansas? What a ridiculous statement even coming from the Godfather of ridiculous statements. Sure, Bill Self played a large role in why Wiggins chose KU but Wiggins has made numerous comments about how much he enjoyed his visit to Kansas, its people, the atmosphere and the atmosphere inside Allen Fieldhouse. KK hates Kansas more than the Democratic Party.

“Kentucky is going to have more great freshman than Kansas. What that means I don’t know.”
Kevin Kietzman, 810 AM
GH: It means that Kietzman roots for Kentucky when it comes to college basketball.

“The challenge for Coach Self is how do you make that kid play defense? He’s going to be the number-one player in the draft! That’s got to be frustrating for Coach Self. The hope is that they are so freakishly athletic that they don’t have to be fundamentally sound defensively but still be able to block shots because they’re there.”
Kevin Kietzman, 810 AM
GH: KK obviously has not done his research on Andrew Wiggins, who some college analysts are predicting will be the best defensive player in the game. I am sure Coach Self is up to the task of getting Wiggins to slide step, cover and reject shots.

“They should be almost a shoe-in for the Final Four. The question is do they win the national title.”
Kevin Kietzman, 810 AM
GH: One of KK’s favorite moves is to direct a backhanded compliment toward a rival of K-State’s. If KU doesn’t make the Final Four with Wiggins, they failed as a program.

“Almost regardless of what he does at Kansas, unless it’s some sort of a devastating injury, he will still be the number-one pick next year. The ceiling is so high, the talent is so immense that there is no way to exaggerate this. There is no overhyping this player. There is no talking about him too much.”
Kevin Kietzman, 810 AM

“Even if you’ve left the conference and are a fan of another team, you watch (Kansas) because you hate them! You can’t stand the fact that Andrew Wiggins is there today. You despise it.”
Kevin Kietzman, 810 AM
GH: Come clean, Kev. The “you” in the above comment should read “I,” right?

Software guy who has been writing my Off The Couch column in KC newspapers, publications and websites since 1994. Has been bounced from some of the finest media establishments this side of State Line Road. Dad first and everything else second...and there are a lot of everything elses.
View all posts by Greg Hall →
This entry was posted in Greg Hall OTC and tagged bill self, foot putt, kansas jayhawk. Bookmark the permalink.